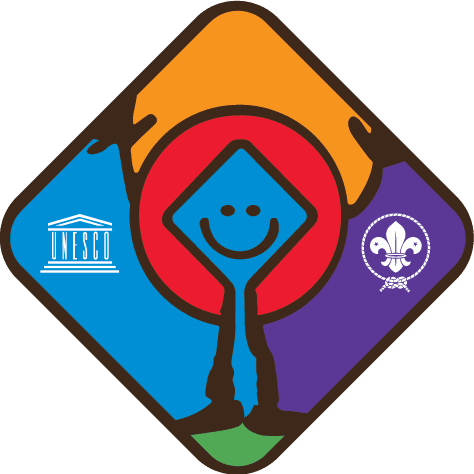 Patrimonito (meaning ‘small heritage’ in Spanish), which represents a young heritage guardian, has been widely adopted as the international mascot of the World Heritage Education Programme.

With a similar vision to protect our World Heritage, WOSM and UNESCO collaborated and that gave birth to the World Scouting UNESCO World Heritage Recognition Programme (Patrimonito Scout Badge).

To raise awareness and mobilise young people, Scouts or non-Scouts, to participate and help in World Heritage preservation and promotion

To promote active citizenship among young people in the world, which is one of the aims of the UNESCO World Heritage Education Programme and World Scouting’s Youth Programme

To develop World Heritage-related activities that will raise awareness among the younger generation and, help create as well as strengthen interactions between young people and local communities

To provide a platform through the SW Award Programme for continuous action where Scouts and non-Scouts can deepen their knowledge, gain skills and contribute to cultural issues and sustainable behaviour

Scouts worldwide are committed to their promise to fulfil their duty to create a better world, as the founder of the Scout Movement, Baden-Powell said in his last message in 1941, ‘Leave this world a little better than you found it’. Creating a better world is not only a slogan and vision for Scouts, but also a way of life and a value they live.

Throughout the history of humankind, human beings have identified themselves with their culture and heritage, which give them a sense of pride. To a certain extent, our cultural heritage mirrors our national unity. Therefore, the preservation of heritage properties is an important undertaking, as it helps in understanding the story of a race. Heritage includes both the tangibles (monument, landmarks, places, etc.) and the intangibles (stories, dances, food, etc.).

The World Organization of the Scout Movement (WOSM) and the United Nations Educational, Scientific and Cultural Organization (UNESCO) have acknowledged the importance of World Heritage and the need to work together to protect it. The UNESCO World Heritage Centre protects sites of Outstanding Universal Value through the 1972 Convention concerning the protection of the World Cultural and Natural Heritage, while WOSM is empowering young people through its unique non-formal education method to become active citizens in society.

Driven by their visions, both organisations are collaborating to empower young people worldwide to take the initiative to protect the heritage of the world through the World Scouting-UNESCO World Heritage Recognition Programme. It consists of a badge and certificate, recognised by both UNESCO and WOSM, to be called the Patrimonito-Scout Badge, for the purposes of promoting World Heritage, educating young people and calling on them to take actions for sustainable development.

– Complete a SW Award Voluntary Service in a UNESCO site

We are at capacity for this programme at the moment
Please stay tuned for more updates!